Recently, I was asked about the history of Columbia’s music scene. This question, I admit, took a great deal of thought. Naturally, old-time string bands came to mind. I could just see Jim Skinner on the banjo, Curtis Lentz sawing the fiddle, and the Hedrick boys picking guitars at a square dance on any given Saturday night in Columbia in the 1940s and 50s.

However, I was to learn that Columbia has given birth to a variety of musicians of varied genres.

Take Charles Hunter, for example. Hunter was born in Columbia in 1876. Blind at birth, Hunter was sent to the Nashville School for the Blind where he was taught a trade—how to tune pianos. After completing his training, he was employed by French Piano Company in Nashville. It was here, many think, that Charles Hunter explored his love of music and began composing ditties on pianos between jobs. Later these ditties would become full Ragtime compositions.

The “Music” entry in the Tennessee Encyclopedia reads, “Most Tennessee ragtime composers came from the mid-state and created compositions so distinctive and numerous that some historians speak of a ‘Nashville style’ in early ragtime. Perhaps the most prolific and well known was Columbia native Charles Hunter…”

About the time that Just Ask Me was release, Hunter moved to St. Louis, Missouri. In a new city, his fame as a composer had preceded him. He was welcomed with open arms into the nightclubs of St. Louis’ red light district, where Hunter seemed to relish his fame. The late nights, cigarettes, and liquor weakened Hunter’s system and his body was stricken with tuberculosis. He died January 23, 1906, a few months shy of his thirtieth birthday. He is buried in the Knights of Phyias plot in St. Louis’ Bellefontaine Cemetery.

Another group of Columbia natives were the Miller brothers: Flournoy, Irvin, and Quintard. These men (Flournoy and Irvin, especially) left an indelible mark on the world of show business.

Flournoy (F. E.) Miller, according to New York Public Library, was an “actor, comedian, playwright, lyricist and producer.” Born in Columbia in 1889, Flournoy went to Fisk University with childhood chum Aubrey Lyles. There, the two formed the duo act of Miller & Lyles and found success on the vaudeville circuit.

This duo would take their success all the way to New York City. In 1915, the duo starred in the first major all-black musical comedy, Darkydom. Then, in 1921, the two, along with Eubie Blake and Noble Sissle, wrote and produced Shuffle Along—the first Broadway musical produced entirely by African Americans. The show had a three-year run on Broadway. 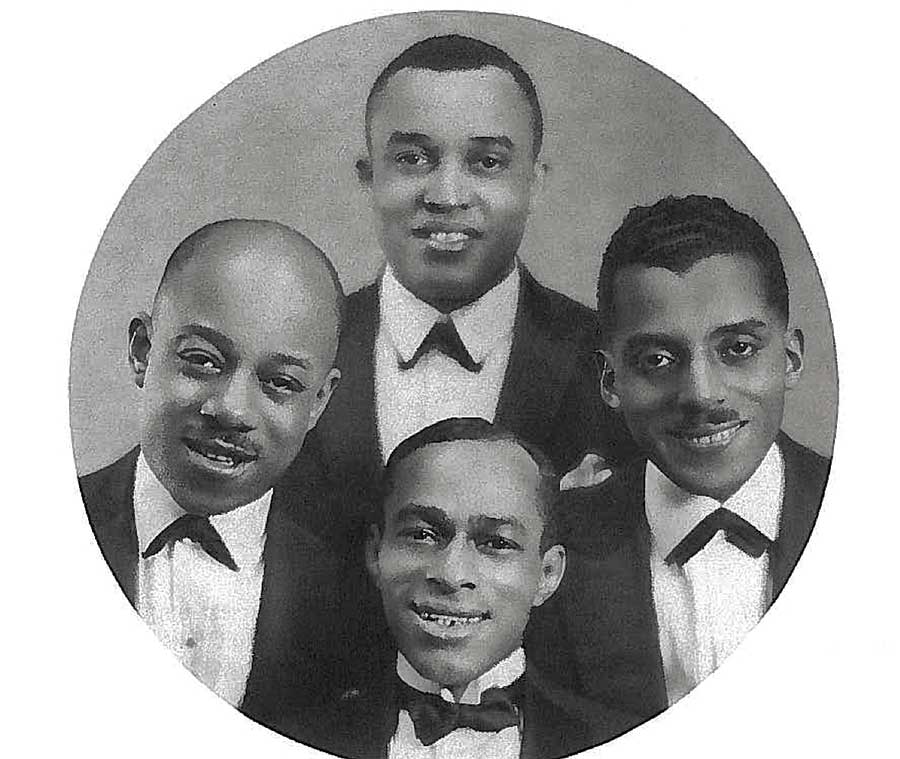 Flournoy Miller (top center) and Aubrey Lyles (bottom center) along with Blake and Sissle. Together, the four would write Shuffle Along. Photo courtesy of American Theatre.

The duo would continue to produce musical and comical acts until the death of Lyles in 1932, at which time Miller teamed up with comedian Mantan Moreland. The two would appear in Harlem on the Prairie in 1936. It was the first all-black western. Miller would also go on to write for the Amos and Andy television show. (He and Lyles had performed and wrote for the radio version of the show during their time as a duo.)

Flournoy Miller’s professional portfolio was extensive—much of it groundbreaking. He definitely helped pave the way for others to follow. As did his brother, Irvin C. Miller.

Floyd J. Calvin wrote in the February 12, 1927 Pittsburgh Courier, “Irvin Colloden Miller was born in Columbia, Tenn. He graduated from Fisk University at Nashville in 1904, played left halfback on the Fisk football team, played baseball, basketball, was [a] boxer and runner.” By the time of this 1927 article, Irvin C. Miller had written and produced several musical comedies for the stage, some of them very popular. Still a comedian, Miller told the reporter, “The only two things I still use from my athletic training is my running and boxing. When I do big talk, if my boxing can’t back me up, my running can.”

His 1923 show Dinah was extremely popular. This show introduced the Black Bottom Dance that swept the Jazz Age dance halls and found its way into society balls.

But it was his Ziegfeld Follies-inspired show Brown Skin Models that really put Irvin C. Miller on the map. This show would run, updated annually, for thirty years. All the while, during the tenure of Brown Skin Models, he was producing new work and would have several shows touring the nation at any given time.

Irvin C. Miller would pass away at the age of 91 in 1975. His younger brother, Flournoy E. Miller, proceeded him in death in 1971. In 1979 Flournoy E. Miller was posthumously nominated for a Tony Award for his lyrical contributions to “Eubie!”

This is, by no means, Columbia’s complete music history. Let’s just call it the intro.