Mention the Athenaeum in Columbia and, automatically, the mind turns to a small corner lot where Athenaeum and West Eighth Streets meet. There on this corner lot is all that remains of the Columbia Athenaeum, a school for young ladies that operated from 1852 until 1903 under the tutelage and leadership of the Rev. F. G. Smith Family. This remaining building, completed in 1837, was the rectory of the Columbia Athenaeum and family home of the Smiths, really, just a small part of the Athenaeum Campus.

At its peak, the campus of the Athenaeum consisted of over twenty acres near current-day Downtown Columbia. Using modern-day street names to describe the boundaries of the campus, the northern boundary was West Seventh Street; to the east, Walker Street; to the south, West Ninth Street; and Beckett Street to the west. All of the property within these bounds—save the four acres next door belonging to the Columbia Female Institute—made up the campus of the Athenaeum. Some physical evidence of this is located on the corner of West Seventh and Walker Streets. The small stone pillar on the corner now occupied by the radio station is the original corner marker of the Athenaeum property.

Once the Athenaeum closed in 1903, the buildings were sold to the City of Columbia for use as a public high school. In 1915, the first Central High School would open on the site of the Athenaeum Study Hall. The Columbia Orphan’s Home (now located at Ferguson Hall in Spring Hill) would be built on the old Athenaeum campus as well. Later, the site of the Columbia Orphan’s Home would become the first Whitthorne Middle School.

The remaining property was sold by Smith heirs and was subdivided into building lots, hence the landlocked state of the Athenaeum Rectory today. King’s Daughters School, West Seventh Street Church of Christ, Maury County Board of Education, the Family Center, and several businesses along West Seventh Street and multiple homes sit on the original campus of the Columbia Athenaeum.

Although the Rectory is all that remains, several photographs of the Athenaeum buildings have survived. The Smith descendants now living in Texas shared these amazing photographs of what used to be.

A beautiful six-rail fence surrounded the Athenaeum property. But, there were several ways to get on campus, including the two gates photographed here. The gate in the foreground was the entrance to a gravel walkway through “The Grove,” a wooded area that the Smith’s allowed the community to access as almost a city park. In the grove was a bandstand and it was a popular place for picnics and town celebrations. The gate in the distance to the right was the carriage entrance that led to the Athenaeum Rectory and the campus to the south.

This is the carriage entrance to the Athenaeum located on West Seventh Street. 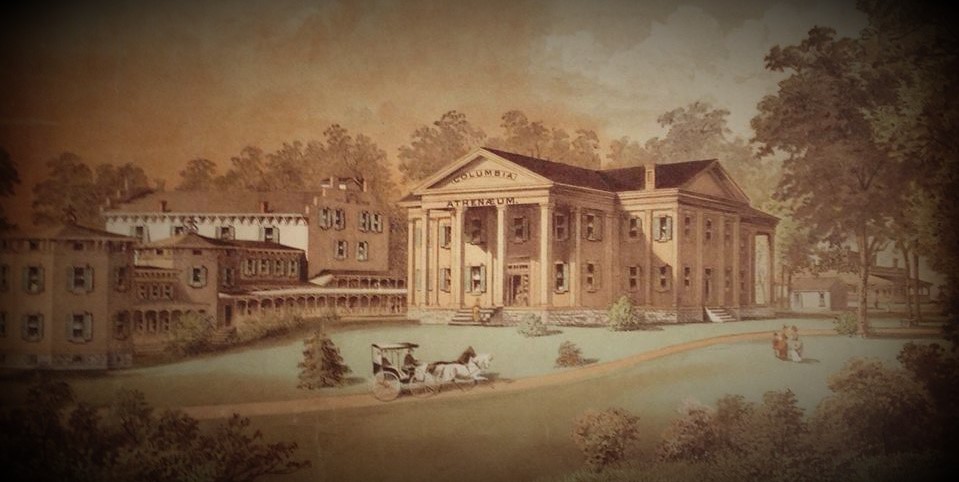 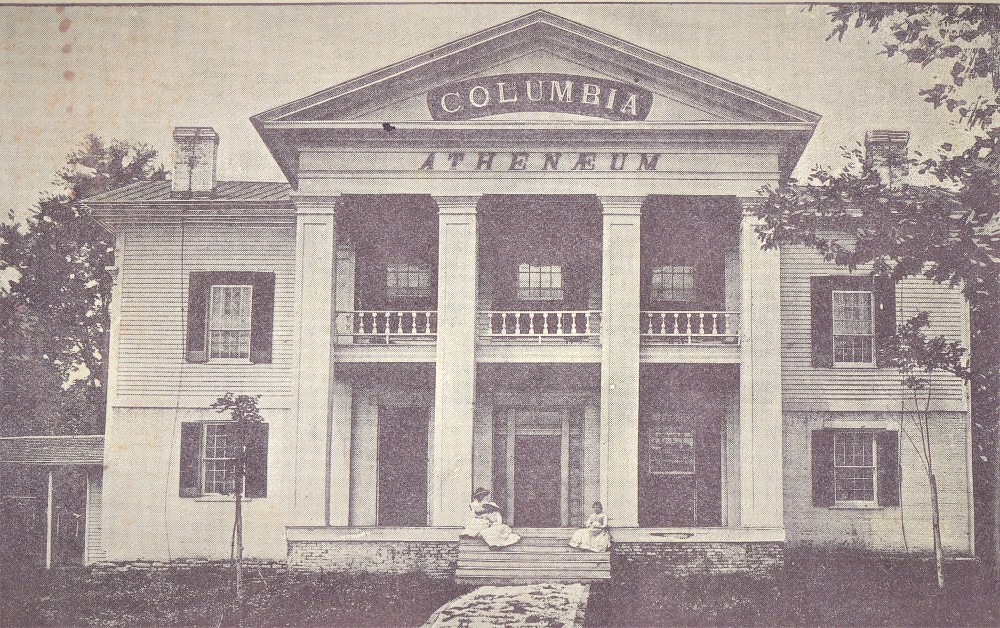 One of the most iconic buildings on campus was the Study Hall, above. This is the south side of the building as shown in the lithograph.

This photograph shows the north side of the large study hall. This would have been the view from the back of the Athenaeum Rectory. 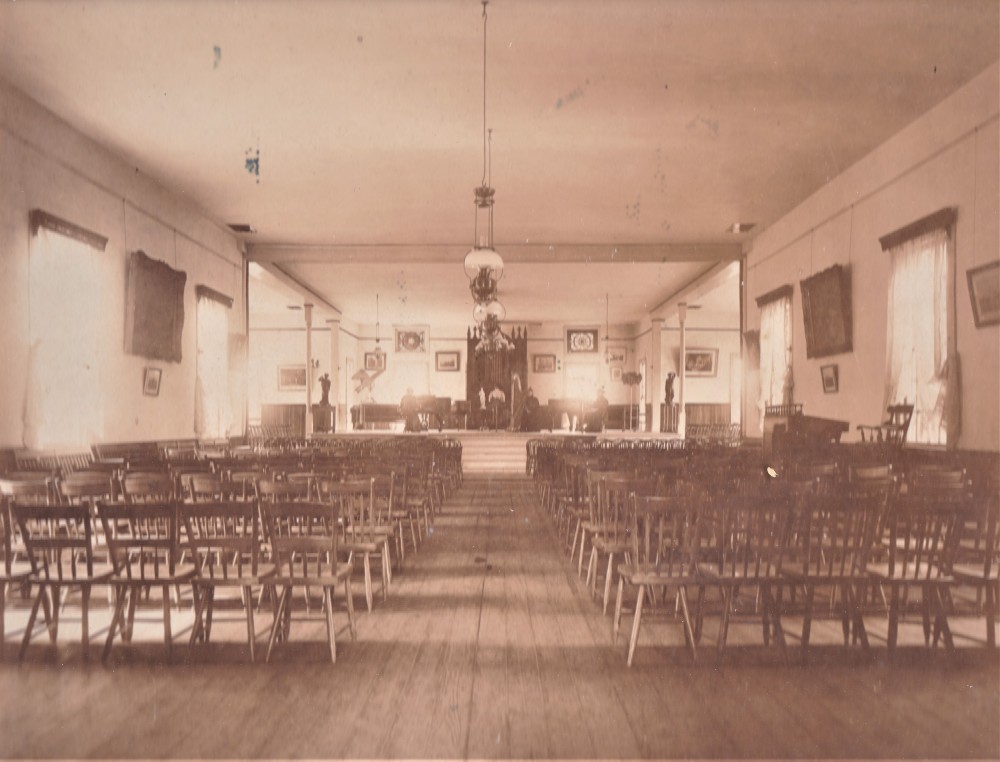 Inside of the Athenaeum Study Hall.

Another view of the south elevation of the Study Hall. Part of the “Pavilion” can be seen to the left. 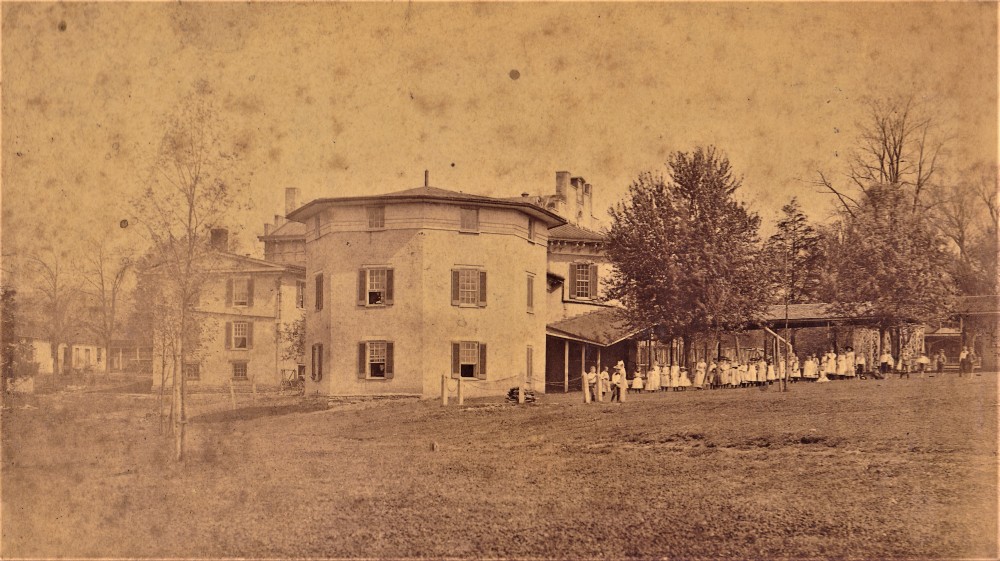 South elevation of the Athenaeum Campus, showing the Pavilion above. Between the Pavilion and the Rotunda would have been the school’s library. 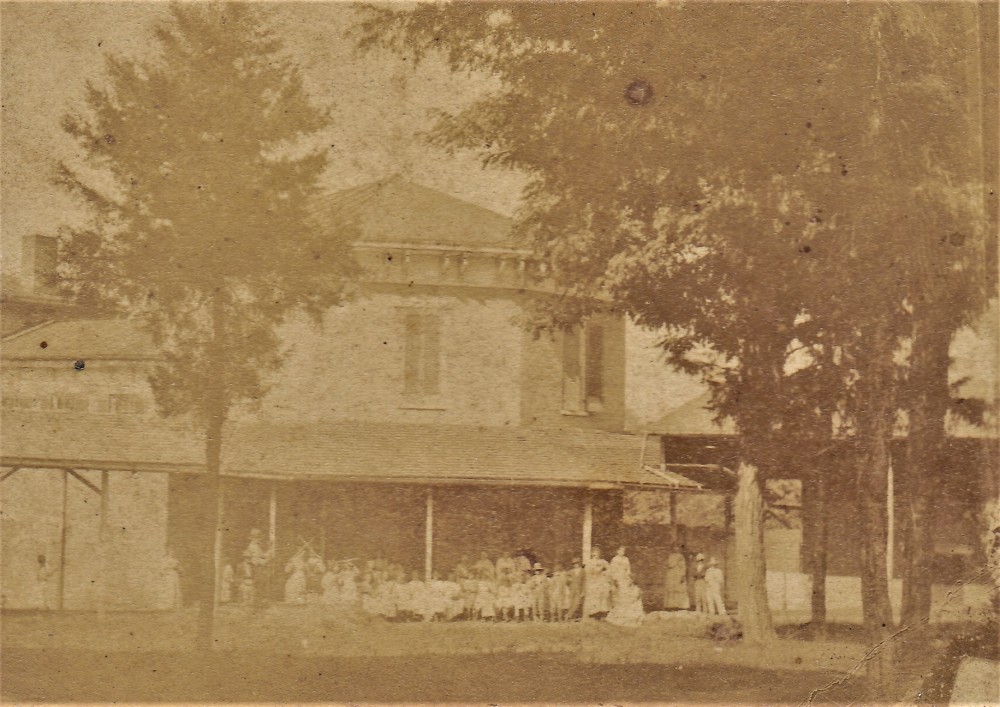 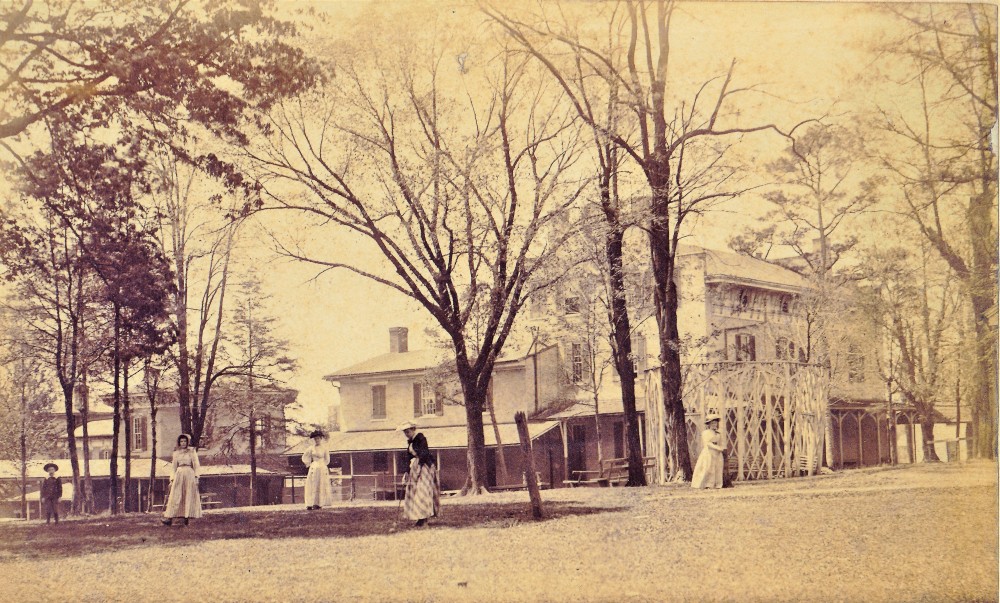 Just a few steps north of the Rotunda was Davis Hall, the school’s dormitory. Young ladies can be seen playing croquet on campus.

A closer view of Davis Hall. The addition to Davis Hall (to the left) included a gymnasium and a bowling alley for the students.

The historic Athenaeum Rectory is open Thursday through Saturday from 10am to 4pm. Tours are given during those times for $5. Visit www.HistoricAthenaeum.com for more information.